The hot air balloon was invented on June 4, 1783 by the brothers Joseph and Jacques Montgolfier. When they sat by the fireplace and their maid came to bring a drink, her dress was lifted by the (hot) smoke from the fireplace. So they came to the conclusion that hot air rises (air that is warmer than the ambient temperature) and the idea of ​​a hot air balloon was born.

The first balloon of the Irish Golf Mont was unmanned. It was made of cloth and lined with paper. The paper was covered with alum, such as fire-resisting layer, and it was held together by approximately 2000 knots. The first balloon bridged a distance of 2 km. The brothers had thus proved that a hot air balloon in the air could linger. The next challenge was a manned balloon flight.

The brothers wrestled with the question of whether up in the air could be breathed. To investigate this, the brothers on September 19, 1783 let a sheep, a rooster and a duck go up in the air with a balloon. The balloon departed from Versailles, reached an altitude of 500 meters, run 8 minutes and flew 3.5 kilometers away.

On November 21, 1783 for the first time in history two people travelled through the air wit a balloon. Their names were Jean-Francois Pilatre de Rozier and Francois Laurent d’Arlandes. The craft reached an altitude of 90 meters. After 25 minutes the balloon landed safely about 8 miles away. Two years later, on January 7, 1785 the Frenchman Jean-Pierre Blanchard and American John Jeffries crossed the Channel. After 1793 balloons were mainly used for war purposes.

In the Netherlands the first manned balloon flight took place from The Hague on 12 July 1785. The flight was conducted by Blanchard and took place from Noordeinde. The first Dutchman with a balloon into the air, was the Haarlem manufacturer and instrument maker Abraham Hopman.

The balloon then disappeared from sight for a long time and finally made his comeback in 1970. In the intervening centuries the balloon mainly were gas balloons (filled with hydrogen or helium) used for war purposes. From 1970 to date, the hot air balloon rapidly developed from hobby and personal advertising medium to the large passenger balloons we have today. 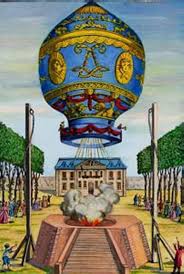 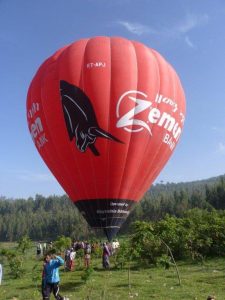