Lake Zway or Lake Ziway is one of the freshwater Rift Valley lakes of Ethiopia. It is located about 100 miles south of Addis Ababa, on the border between the Regions (or kililoch) of Oromia and of the Southern Nations, Nationalities, and Peoples. The lake is fed primarily by two rivers, the Meki from the west and the Katar from the east, and is drained by the Bulbar which empties into Lake Abijatta. The lake’s catchment has an area of 7025 square kilometers.

The lake is known for its population of birds and hippopotamuses. Lake Zway supports a fishing industry; according to the Ethiopian Department of Fisheries and Aquaculture, 2,454 tonnes of fish are landed each year, which the department estimates is 83% of its sustainable amount.

The shores and islands of Lake Zway are the home of the Zay people. Tradition states that when the Muslim Ahmad ibn Ibrahim al-Ghazi conquered Ethiopia, the Christians of the area took refuge on its islands. They were later isolated from the rest of Ethiopia by the Oromo people, who settled around the lake. At the time Menelik II conquered the lands around the lake, the lake-dwellers were rediscovered and found to have preserved both their Christian faith and a number of ancient manuscripts.

Ziway is a great area to fly over. Because of the early meeting time (05.30 AM) we recommend to combine your balloon flight with as stay at the beautiful Haile Resort Ziway. 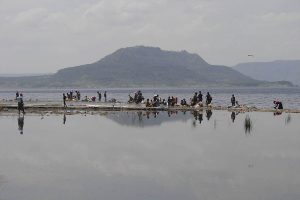 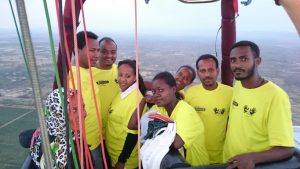